Read more
Posted by wwenze at 7:17 AM 1 comments

Labels: audio, Beyond the hype, review

[Beyond the hype (sort of)] Passivized Audioengine A5 vs Paradigm Atom v.1 (repaired)

Labels: a5, audio, audioengine, Beyond the hype, review

Read this before connecting two fans in series

This post is created in response to various people on the internet trying to/suggesting others to put two fans in series in order to power them from a higher voltage power supply.

Read more
Posted by wwenze at 7:34 AM 5 comments

A few years ago, USB DACs based on PCM270x series of USB-receiver-cum-DAC were the rage. I can't give you the exact dates because I was late to the party and have stopped going for a while now, but 2007 to 2009 seems like a fair estimate.

Thanks to ACRbonsai for writing this interesting text.

I'm going to start another series/category, this time being reviews on old things.

I may also be looking at some stuff that are not that old, but the hype has in my opinion died down. Wink wink. Well you'll see it when I post it.

Now lets move on to the meat of this post, starting with an old famous product.

In my first review of the LJM CS4398 eBay DAC, I used a Xonar DX to do mainly RMAA measurements.

Well, some thing happened the week before this, and also now I have an STX, so I want to do some new measurements, measurements that are not RMAA and can be used for comparison against others.

1) Each rail is measured while the other is left unconnected. It is possible that current draw might be higher if both rails are connected.
2) Does not include power drawn from PCI-E slot.

I opened up this portable speaker with the intention of converting into a passive one, 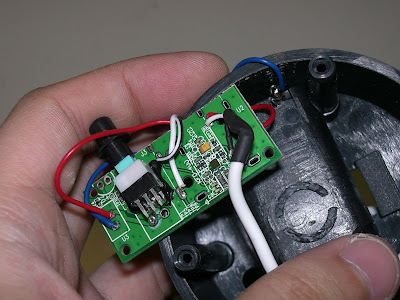 It is a mono speaker that accepts 3.5mm stereo input. I couldn't see clearly the different solder joints for the red and white input wires, so I looked at the bottom of the PCB, 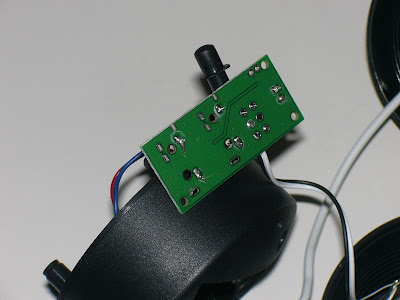 And I realized that I didn't see wrong, the red and white wires are indeed connected together. A quick check by the meter confirms it to be the case. 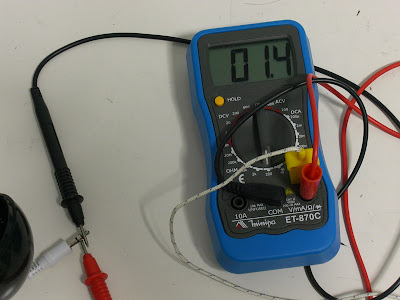 Pardon the zero error of the cheap meter.

Would it have cost them too much to include two more resistors? Luckily I haven't connected it to a headphone amp, or I'd be even more mad if something of mine did spoil. 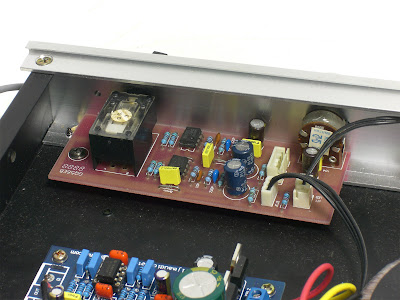 I was looking at 12V "industrial"-type power supplies, may be useful for mITX builds.

There was one being sold rather cheaply for its output power.

I can let it have 99% power factor, possible in this day and age of active PFC, but over 90% efficiency for an AC to DC power supply so cheap? Not likely.

So this thing is obviously incapable of sustaining 120W continuous.

If you observe, a good power supply's (input voltage x current) in VA (volt-amps) is much bigger than its rated maximum output power in watts, in some cases more than twice as much. So this can be a good way to see if the company is padding their ratings.

Back in Dec 2009 I repaired a Sirius LCD TV. This thing uses Teapo/cheapo (Japanese probably pronounce it that way) caps in multiple places. When I bought the replacement capacitors I forgot to check the temperature rating and bought new ones that are lower than what the Teapos are rated, so instead of all the capacitors I just replaced the single one that has obviously failed. It brought the TV back to life so I just left it like that.

Despite the lower temperature rating for a capacitor placed right next to a heatsink, the capacitor lasted more than two years.

A few days ago, the TV finally decided to go psycho flickered the backlight vigorously. I feared for the backlight and its inverter, because if either of them is dead it is virtually impossible to repair or replace.

Checked the power supply nonetheless. On first inspection nothing seemed out of place. But many times a capacitor can appear fine (no bloat, leak) but the inside has dried out. And these are Teapo caps. So I proceeded to change them anyway.

And after removing the capacitors, the cause of failure became clear - 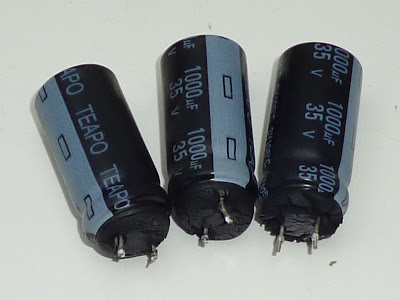 Yupz, capacitors can pop from the bottom too, and it's hard to see when you're usually viewing from the top.

The ideal thing is to order new parts fit for the job, but today is Saturday and I need to know if the TV can be repaired like now so I know if I need to buy a new one. So I dumped the 1000uF 35V Panasonics that I have lying around inside. 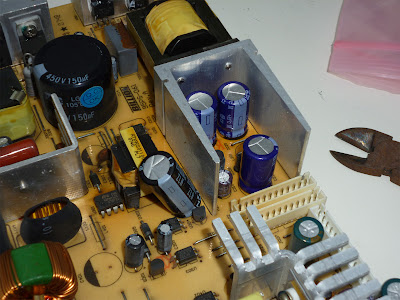 At the same time I also removed the previously installed Panasonic and went totally overkill - Rubycon ZLH 2200uF 25V, bitch. If this (10000 hours @ 105°C and more than double capacitance and voltage ratings) doesn't last I dunno what will.

Problem solved, lets see how long this TV can last.
Posted by wwenze at 9:47 AM 0 comments 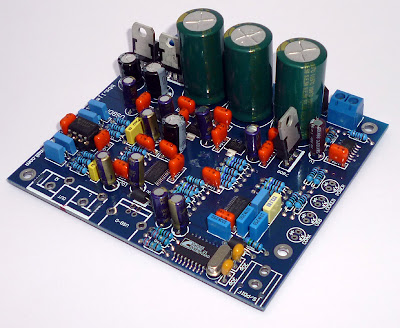 Read more
Posted by wwenze at 7:59 AM 0 comments 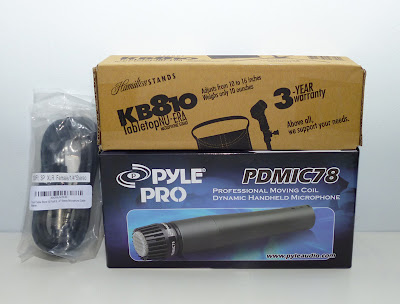 Read more
Posted by wwenze at 8:32 AM 6 comments

Some stuff from Amazon 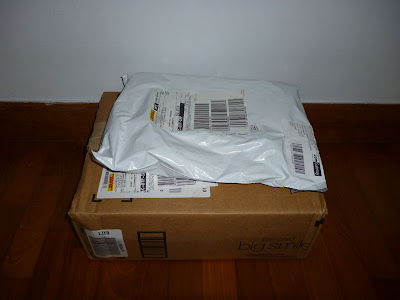 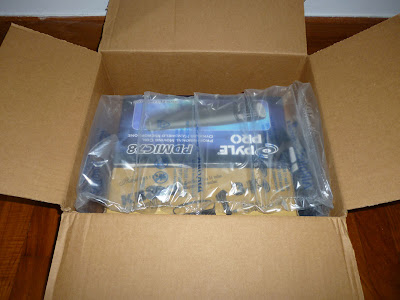 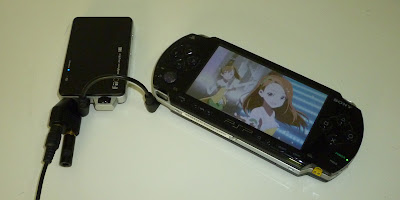 So, do the results in the previous post apply to this scenario? 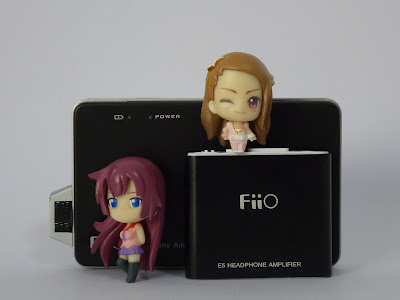 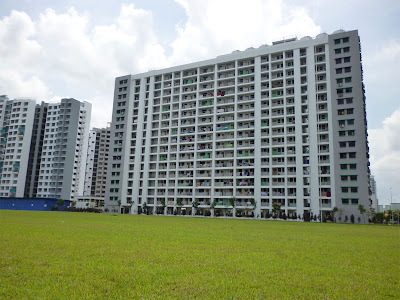 I would've preferred to call this photo "Our Future", but "Our" sounds like the whole of Singapore, sounds too patriotic. Instead I want it to mean "Our" as in people that are like me and with me.

If sh1t continues, this is the type of flat we would be living in, when we are old and have no pension, forced to sell the flat you've been living in for 40 years for money because your single child is paying $1500 a month for his new flat with a household income of $4000 per month which requires both parents to be working so they have to spend a lot of money on childcare, and when you sell your own flat which you used all your CPF and some extra cash to pay for, the government demands you put $130,000 back into the CPF account so that they can invest with that money of yours and give you back a small sum every month, so you only get a small amount of cash that you can't do anything with except rent the smallest public housing that's being built. 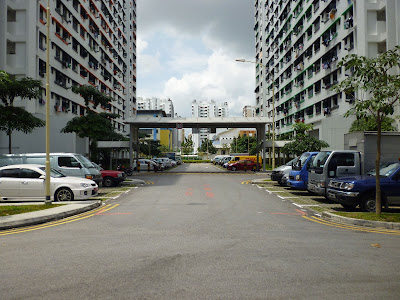 Oh, and no multi-storey carpark in this day and age! They are discriminating against renters, saying that most of them cannot afford a car. But well, they're right, because even non-renters can't afford a car, not when a car costs a quarter of a flat and you can only use it for ten years upon which its value drops to zero. It's funny because it's true

You have a device running on 115V.

But when you use it with an isolation transformer that also does 230V -> 115V, you start hearing the improvements.

This is a bit late (okay, a lot late), but here are the RMAA results for the first PSP. 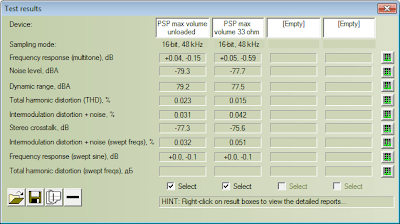 (Ignore the crosstalk measurements because they are wrong!)
Unloaded 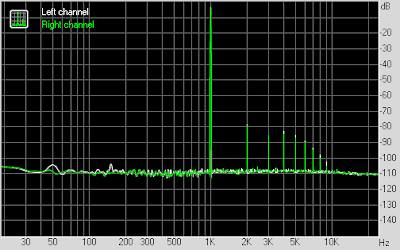 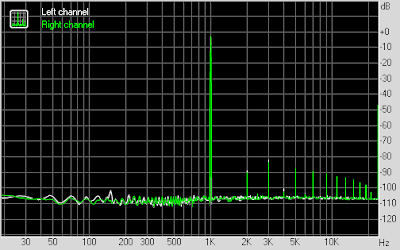 Oh, and the output impedance is about 15.8Ω. Kinda high for some earphones. My X10 sounds like this: 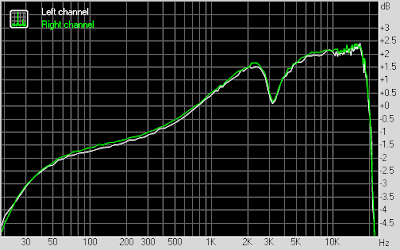 Ok, so I don't know when to call it a review and when to call it a quick look, so screw the concept, everything will be called reviews regardless of how good or rubbish they are. So I've joined the masses of creators of bad reviews.

Continuing from the previous review, I have decided to make x264 (but not Mediacoder!) the winner instead of MainConcept encoder used in TMPGEnc XPress.

Read more
Posted by wwenze at 9:11 AM 0 comments

Update 14/01/12 - Is what is said in this review the absolute truth? Find out at Freemake vs Mediacoder vs TMPGEnc - PSP edition.

Table of Contents
Reason for doing this
Before we start - Frontends for x264 and encoding settings
GUI and feature comparison
Test setup
- Why two pass?
Encoding time comparison
Encoding quality comparison
- Thinning the herd
- Round one
- Round two
Conclusion - Which encoder is right for you?